tldr; The seat next to the jumpseat is a great seat for a solo traveler on JetBlue flight B6 578.

Hey everyone!  Recently, I’ve been getting really into traveling on specific carriers and specific routes, with specific seats.

One of my favorite things to do, that I recommend that everyone doesevery time they fly, is to check the seat map on SeatGuru.com.  I remember when my friend Shawn told me about this site, and the first thing I thought was: Holy shit, this is life-changing.  It allows you to be able to look up row by row in the configuration of the plane assigned to your flight so that you can pick the best seat within what’s available (economy, business, first), but most importantly, avoid the worst seats.  The worst seats are highlighted in red with a note for why this is the case.

I’ve gotten really spoiled with the class of service, particularly for international trips, and I like using SeatGuru when I can’t fly business class for whatever reason domestically.  It’s really helpful for economy because it will tell you things like This seat is missing a window for those who are looking to keep up their Instagram with a clouds pic.

I recently used it on my flight from San Francisco to Fort Lauderdale on JetBlue, B6 578.  It’s a direct flight at about 5hrs and 15m but because it’s a Mint-flying plane, most of the space is allocated to the luxurious suites in Business Class.  That basically shafts people flying in economy.  So, I used SeatGuru to look up the seats to do the best with what I had available.  I found a middle seat with a strange configuration where the aisle seat next to it was missing; when I did more research, I discovered that this because 18E on this Airbus is seated next to the jumpseat.  For those of you who aren’t familiar, the jumpseat is the seat that a flight attendant will sit in during departure and landing.  I thought it would be quite odd, but since I was flying at 9:30AM, I figured a day flight would be just fine in 18E since everyone would be up and about. 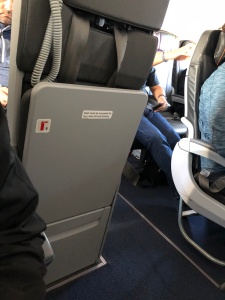 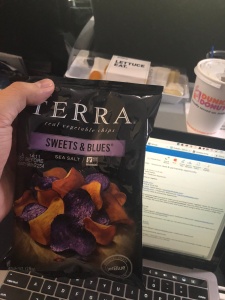 Much to my delight, this seat is lodged in the emergency exit row, which makes it an excellent place to sit because of the extra legroom.  It also isn’t pressed up against the jumpseat as aggressively as I thought it might be, so there’s actually plenty of space for an average person to feel comfortable in the only middle seat I would book on this plane.

If you’re debating which seat to book in Economy and the bulkhead seats are all booked, then book the seat next to the jumpseat.  It’s great for someone traveling alone.  Also, because the flight attendant gets up to run service, the storage below the seat in front of the jumpseat is empty so you can shift your things over if you are craving just a couple more inches of space.

PS, do not get the window seat next to it.  There’s reduced space, and it feels incredibly claustrophobic because that seat does not have a window.  It’s pressed up against the emergency exit door, which has a micro-sized peephole instead of a window.

Motivational Quote of the Month

The less I needed, the better I felt.